The Big Finish by Brooke Fossey 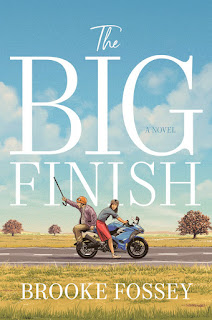 He's eighty-eight and living in an assisted living unit with his friend and roommate, Carl.  He's totally amazed when some young girl climbs into their room in the middle of the night.  When Duffy asks her what she thinks she's doing.  She says she's looking for her grandfather.  Carl never mentioned anything about a granddaughter...

Berkley and Edelweiss allowed me to read this book for review (thank you).  It will be published April 14th.

Duffy soon figures out the young woman is an alcoholic.  He's been one in the past and he wants to help her.  She doesn't want his help.  They can't hide her in their room.  She says she has no where to go.  Carl asks her where her mother is.  She tells him she died two weeks ago.

They get some help from the cook and find a room they can put her in.  Duffy visits as she goes through the stages of withdrawal.  It's hard but she's trying to clean up.

Then her boss shows up.  He wants her back.  But the grandpas don't want to give her back.  They tell him she's not there.

They have to hide her from the nurses, the boss, and gossipy folk.  It's a chore.  Then they see her boss again.  He tells them she wrecked his truck and she owes him for that.  They agree to meet him to get her clothes and to get her mother's ashes.  That doesn't go as well as it should but they get rid of him finally.

I spent time with both sets of grandparents in my younger life.  Never assume old people are dumb and they are often stronger than you know.  This book is a good example of that.