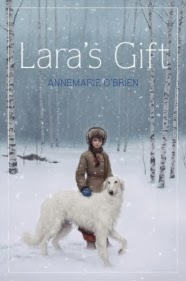 Lara is being trained to take over as kennel steward but her father's not happy about it.  He wants a son to carry on his tradition.  Women got married and take care of the household and the family, not raise dogs train them.  It begins to look almost hopeless when she acquires a baby brother...

Alfred A Knopf sent me a copy of this book for review (thank you).  It has been published, so check with your local bookstore for a copy.

I could really relate to Lara.  My own father believed I'd just get married and have babies, he wouldn't pay for college.  The old country has beliefs that haven't changed in centuries.  My other thing in common with Lara is that I love dogs, too.  I don't have one now and I miss that interaction.

When the mother rejects the last puppy born, her father is going to "take care" of it.  Lara begs to keep the puppy and care for it.  He's reluctant, but finally agrees.  Her dog Zar is the runt of the family, but he's true, has all the Borzoi qualities and she believes he could be a wolf killer if he is taught.  Her father won't train him.

This story made me cry.  One dog is a wolf victim and Lara's dog does too well and gets sent to the Tsar.  It's a great honor, but it's so sad.

As if Lara doesn't have it hard enough trying to change things in the kennel, she also has visions and her father doesn't want to hear about them.  As she proves herself, he finally tells her why.  And he also makes her kennel steward.  Even the old can change their ways.

This is a good story and Lara is going on with a new puppy.  When you're the kennel steward, you must make sacrifices.


Another interesting point:  While this story is based on historical fact, I found it interesting that Knopf was the publisher.  The Borzoi is their trademark logo.  And here is why: "The coursing Borzoi has always been our trademark . . . A neighbor next door has a good specimen of Borzoi, and I have checked my details--head, build, etc.--with that dog. From the very beginning we have frequently been asked the meaning of the word "Borzoi" and what it has to do with books. When I started in business the publisher I admired most was London's William Heinemann, and the sign of a Heinemann book was a windmill, drawn for him, I think, by William Nicholson. Since a windmill obviously had nothing to do with books, I saw no reason why we could not adopt the Borzoi as our mark." --Alfred A. Knopf, 1948

All in all, I found this to be a very good read and suggest anyone with an interest in dogs will enjoy it, regardless of age.

Posted by Journey of a Bookseller at 3:36 PM