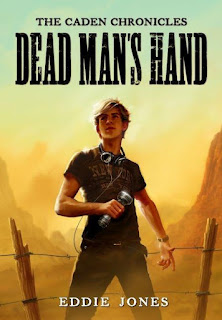 He saw a dead man in the hayloft in the barn, but when he takes folks back there to show them, it's gone...

Zondervan and Edelweiss let me download the eBook of this story for review.  The book has been published and you can get a copy at your local bookstore.   This is the first book in the Caden Chronicles series.

Nick Caden is fifteen and on vacation with his family.  His little sister is a pain and his folks don't always get along.  And now they are going to a ghost town for vacation.  Can it get any worse?  Yep, when you know you found a dead man and nobody else believes you.

The story is set in a ghost town that the sheriff would have you believe holds actual ghosts as well as staff members named after characters in the old West.  This resort is not doing well and staff has dwindled, but there are still enough there to give Nick several suspects in the killing.

His parents know he's bored, so they decide to humor him and ask the sheriff to hire him as a deputy and let him try to "solve" the case.  They have no idea just how dangerous this lazy resort can be.

The author makes Nick a strong character with some geeky knowledge and an eye for facts that fit and those that don't.  Mr. Jones also gives him "Annie Oakley" to help and hinder his case.   This is a fast paced interesting story that is fun to read.  It's also just the first in a new series with a young detective.  Nick will be back.

Posted by Journey of a Bookseller at 1:43 PM

As I read this review I recalled a situation in our home. I would go downstairs to get needed stuff from the fridge downstairs, but would tell mom there was a body in the storage room, sometimes saying I could hear it snoring. She told me to not let my imagination run wild. Even had her check the room and of course there was nothing there. BUT then she started realizing food missing from the freezer and a brother who would show up every Sun. for lunch...no matter what time we had it at. She did some inspecting downstairs and discovered a rolled up sleeping bag and pillow in the closet and a basement window that had been pried open.
Will have to check out this book at some point!!

Hey, Shan, sounds like me growing up. I made up lots of stories in my head. Didn't have any neighbors so I had to play by myself. Guess it was good training for writing.