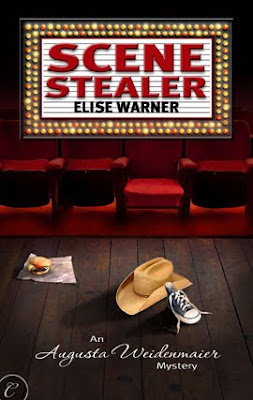 He's only nine and he's missing. Is this a publicity ploy? Could his father have kidnapped him from his mother's custody? Or is this boy a victim of a sexual predator?

This book is from Carina Press and I downloaded it from Net Galley. I appreciate the opportunity to review it.

Augusta Weidenmaier is a retired schoolteacher who is going downtown to listen to the Philharmonic orchestra. She doesn't usually have the money for this sort of treat, so she's really looking forward to it.

Then she notices a very neat young man who looks familiar to her. She wonders why he's with such an unkempt older man during normal school hours. Then she realizes the child is the main character on the Cowboy Bob's Big Bad Burger ads. As she tries to follow them, the crowd slows her up. And when she gets close, she gets shoved into the street. She's heard the boy ask for her help, but by the time she recovers, they're long gone.

Consequently, when she hears on the news that the boy is missing, she does her duty and goes right down to the police station to report it. The Lieutenant does not seem to be impressed with her story, but he listens. Then he sends her home.

When he won't return her calls and she thinks they are on the wrong track, she sets out to do her own investigating - much to the Lieutenant's dismay!

Augusta is not quite a Miss Marple, but she's certainly willing to do what it takes to help the young fellow. She even goes into acting so she has better access to the stage and can learn the backstage gossip.

There are ruthless people all through this story and you're not real sure who the protagonist is even though you learn who the kidnapper is fairly soon.

This is a light mystery read, and I enjoyed it. Perfect for a beach read or a rainy day read. The book comes in a Mobipocket reader format or an Adobe reader format. Get yourself a copy now.
Posted by Journey of a Bookseller at 12:37 PM

Nice review! This is on my TBR pile.