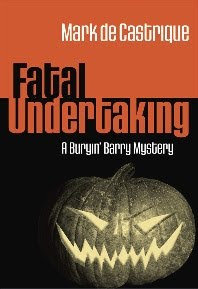 This is the fifth book in the Buryin' Barry mystery series, and I really enjoyed reading it. Poison Pen Press provided the ebook I used for review. The book will be coming out in October, 2010.

The characters are enjoyable. You have a one-eyed Sheriff, Barry's ex-wife and current girlfriend, and the small idiosyncrasies that always abound in small towns when everyone knows everybody else.

And since the first chapter begins with Archie trying to borrow a casket for the haunted Halloween house, it grabs your attention and is not in the least bit boring!

When the body (person) that sits up in the casket to frighten people turns up dead at the end of the evening, there's no end of potential suspects. The plot is well thought out and not obvious.

In the meantime, there's lots of action with Archie being shot at, Barry's ex and the girlfriend making him dinner one night, and the problem with Rachel (the ex) following him around all the time trying to get a journalistic scoop.

It's a fast paced, entertaining read. I'd read more in this series. If you've already been reading them, you have a new one to look forward to!
Posted by Journey of a Bookseller at 12:40 PM