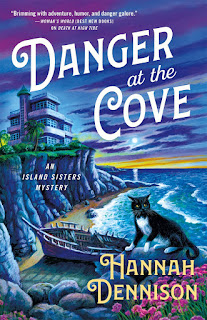 The sisters are opening a new hotel once they get all the refurbishing done.  The repairs are going slow, though, and the opening date is sneaking up on them.There are several workers staying there now and one of the sisters has invited her friend who just lost her husband.

Minotaur and Edelweiss let me read this book for review (thank you).  It will be published on August 17th.

All is going well until they find one of the people staying there dead.  It wasn't an accident.  Someone removed the the ground temporarily so he was electrocuted.  There are no clues and even the police aren't getting far.  Then another one is found dead in the cove.  They thought he drowned but, no.  He'd been strangled.

They are on an island that is only partly accessible during certain times during the day.  Then they find out they have a con man in their midst.  What more could go wrong?