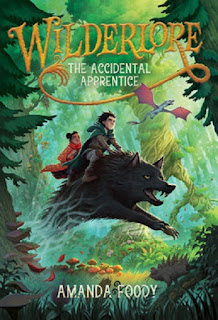 He's an orphan.  One of the big beasts from the forest came into their town and wrecked houses, ate people and then left.  His mother was killed when the walls of their house fell and Barclay saw the monster eat his father.

Margaret K. McElderry Books sent me an ARC of this book to read for review (thank you).  It will be published March 30th.

Barclay knows about Lore masters and has no desire to be one.  But when he gets thrown out of the town, he's glad he's got a friend with him.  She tries to teach him about the woods but it's not long before he, by accident, ends up with a beast living in him.  He can see the mark on his arm.  He is scared but after a bit he finds what beast has him and they get along pretty well.  He's a wolf and he gives Barclay some powers, too.

The adults and part of the children are lying about what has happened in the past.  Barclay and his friend, Viola, are trying to find out the truth.

There's lots of beasts in the woods, there are dangers besides, it's hard to stay safe.  Barclay will need his beast to save him and his friends.  Especially since not all of them are friends..

Do you think that Barclay will stay and be a Lore master or will go back to the town he grew up in?