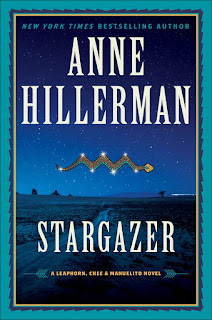 Bernie is doing her regular cop duties when she finds out that someone has been killed and the person confessing to the killing is an old friend of hers.

Harper and Edelweiss let me read this book for review (thank you).  It will be published April 13th.

The woman just says she's killed him and offers no details.  Bernie and the woman's brother and son think she couldn't have done it but a confession puts her in jail.

The man killed was her ex-husband.  As they ask questions, they find he had enemies.  Asking questions leads to more than one suspect.There was an issue with plagairism, they were breaking new scientific ground, and there was jealousy.  But he refused to sign the divorce papers his wife brought, so she could have a motive, too.

Leaphorn and Chee are getting older and they are thinking about whether they want to retire.  That creates some tension in their marriages.

The road to the killer is not a direct one and a lot of ground is covered before Bernie thinks she knows who did it.  But the killer is willing to kill again so she better stay on her toes!