The Memory Collectors by Kim Neville 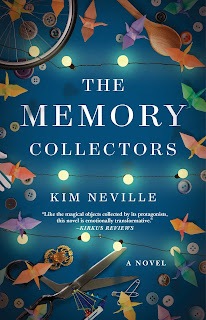 The women in this story have an unusual talent.  They can feel emotions, good or bad, in physical objects.  This particular skill is almost like a curse.  Second hand items are not often full of good feelings.  Most are sad, angry, and every negative feeling you can identify.

Atria Books sent me an ARC of this story to read for review (thank you)  It will be published March 16th.

Ev is the older of two siblings, both female.  They've had deep trauma in their earlier lives and neither of them trusts the other 100%.

Harriet's mother held on to everything and then Harriet became a hoarder.  She's been evicted from her apartment so she buys a big vacant building where she can store her treasures.  Ev and Owen help her move what she had in the apartment but she also has a whole house full of stuff.  Without being aware of it, she's also acquired the goods that were from Ev's family.  Even the deathly scissors...

As they try to learn how to control their skill, they get caught up in their own world.  Can it be made manageable?

This was intriguing and unusual.  Not everyone ends happily ever after but it's a not a bad ending.  Get ready for touchy feelie feelings in the abandoned houses with boxes.