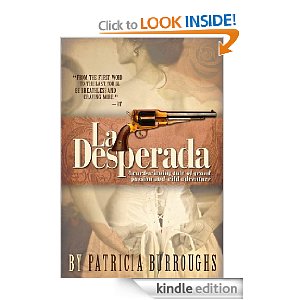 She thought she was going to end up a spinster, but when she met Joel her life changed.  She was attracted to him and his knowledge of poetry; he was attracted to her.  When he proposed she accepted.  She had no idea about his past or his brother...

Book View Cafe has published this book and I got my copy for review from them and Library Thing (thank you).  It has been published and you can find a copy on Amazon now.

Elizabeth just wanted a quiet life with her husband.  However, they were sharing their home with his brother, was as different from Joel as you can get.  Clayton was fat, used to getting his way and was the local sheriff.  He was sniffing around Elizabeth and making her wary of his attentions.  Joel was turning into a drunk.  Life wasn't like she'd planned at all.

When Joel commits suicide and Clayton tries to have his way with her, she runs.  She might not ride well, has little time to pack resources, but she's going to escape.  Even if she has to break out an outlaw to help her get away.

Coulter didn't want any baggage.  No man on the run did.  And that's all Elizabeth was to him.  He had to find a way to get rid of her.  She's tenacious, though.  A lone woman can be raped and killed easily.  Clayton is saying she murdered his brother and people will be believe him.  She's turned into a "wanted" person herself.

Coulter has ties to all the characters in the story, despite having been on the run for years.  Elizabeth just wants to stay alive and stay with Coulter.  The race against time and away from Clayton and posses takes them across mountains and deserts.

This is very exciting tale with honest emotion and growing love between the two main characters.  There is explicit sex.  It didn't detract from the main story line.

Ms. Burroughs has a very good story flow and kept my interest through out the entire book.  I think you'll enjoy reading it, too.  Why not get a copy and check it out?

Happy reading.
Posted by Journey of a Bookseller at 1:37 PM

Hi! I just wanted to let you know I have a new book ready for review, if you're interested. Thanks for all you do!

Let me know whether you prefer .mobi or .epub and I'll be delighted to get it to you.