Book of Mercy by Sherry Roberts Antigone drove long distances when she became anxious or upset.  It calmed her down.  Sometimes she got lost, but she felt better.  Most people wouldn't do that when they found out they were pregnant, but Antigone has a secret...

The author allowed me to read this ebook for review (thank you).  Osmyrrah has published the book and you can grab a copy on Amazon. 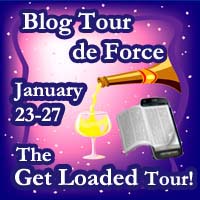 This is another book in the Blog Tour deForce running from January 23rd to the 27th.

Ms. Roberts has made her main character someone that everyone should love.  She raises deer, owns a vegetarian restaurant, and is married to Sam, who loves her dearly and is protective.  She takes in anyone who needs some love and guidance and really cares about them.  She's a generally good person.  Her only hidden fault is dyslexia and she's tried very hard to get over it with no success.

The central theme in this story is the fact that a certain faction of town (the ladies group) wants to ban books from the library.  Antigone is appalled.  She might not be able to read herself, but she wants her child to have the ability to read and the right to read what she chooses, not what someone else has decided is "safe".  The war between the two women is sometimes funny, sometimes sad, and very believable.

I am very much against book banning, so I had to read this book.  I think parents need to discuss books that have uncomfortable issues in them with the children reading them, but I don't think the child should be held back from reading them.  It's better to talk about it and how it makes you or them feel and why you feel that way.  Then they won't be surprised later.

This author does a nice job of presenting both sides of the argument and showing how it eventually gets resolved.  Neither woman comes out of the fight unscathed.  Life is like that.

The story is a bit intense, but it felt "real" and it was done well.  Follow Antigone on her journey for "right."  It's a good read.

Happy reading.
Posted by Journey of a Bookseller at 2:16 PM

Great Review. Thank you. I am also very much against book banning.

Thank you for sharing your wonderful review. You hit all of my issues right on the head of the nail and certainly said it much better than I could have. I am looking forward to reading Book of Mercy and can't wait :)

I read the excerpt and can't wait to read more!
Karen in Breezy Point
kmartin at uslink dot net

What a great and honest review you gave Sherry. I'm looking forward to reading this book.

Love the review and I cannot wait to read Book of Mercy :) It's very nice to meet you!!