The Bounty A Novel by Janet Evanovich, Steve Hamilton 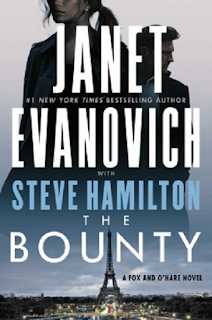 Kate is in the FBI.  Nate is a thief that now works with the FBI and Kate specifically.  They've solved many crimes but this one is the most dangerous venture of all.

Atria and Net Galley let me read this book for review (thank you).  It has been published and you can get a copy now.

They are after gold hid by the Nazi's during the war.  But they are not the only ones on the trail.  There are hidden maps that are a trial to recover, the Brotherhood wants the maps and the gold, and everyone helping them is in danger.

The maps are hidden high and almost not retrievable.  It takes them time to recover them all.  As the Brotherhood wants the same thing they somehow know where Kate and Nate and their friends are.  The phones have been abandoned but the professor still has his.  They remove that and give him a burner phone like they have.

They get closer all the time but haven't found the gold yet.  They've been shot at, had to run to get away, and they have to find the gold!

The professor makes a discovery that puts them on the right track.  Will they live to find the gold?