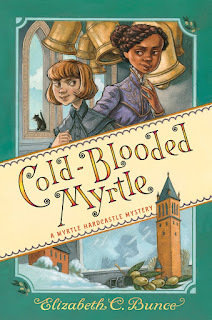 Myrtle is on the trail of a murderer.  The man who owned a store in town is found dead in his store and he was killed by hemlock and his store display was altered.

Algonquin Young Readers and Edelweiss let me read this book for review (thank you).  It won't be published until October 5th.

Many years ago, a group of students were visiting a tower to see the sights.  One of them disappeared and was not seen again.

Now anyone who was in that group is being killed methodically.  Who is the killer?  It seems to be the missing girl.  Could she still be alive?

The police find nothing.  Myrtle's father tries to get her to stop looking before she gets hurt.  She has several suspects but she finally settles on the right one.

Will she be able to stop her in time?