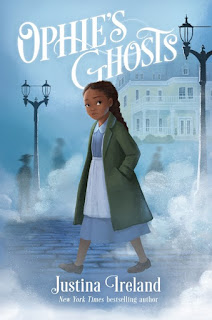 Ophie is a young girl who discovers she can see ghosts.  She can even talk to them.  She's learning how to help them pass on.  The first ghost she saw was her Daddy.  He'd been murdered and he told her to take her mother and hide in her hiding place.  It was good thing they did.  The men who killed him came to burn down their house.

Balzer & Bray and Edelweiss let me read this book for review (thank you).  It will be published May 18th.

Her mother has taken her out of school to work with her as a housemaid so they could save enough money to get their own place.  She takes care of the woman who owns the house.  She's crabby and mean but Ophie puts up with it.

Then she meets a beautiful ghost who cannot leave until she finds out who killed her.  She doesn't remember.  Ophie tries to help her but she's so busy she doesn't have much time.

There are ghosts everywhere in this stories.  Ophie helps all she can.  She works hard on finding Clara's killer but with so many people it's hard to tell.  She finally figures it out...