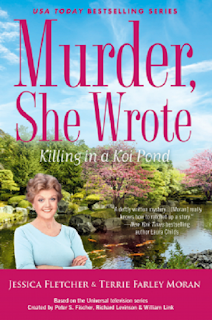 Jessica goes to visit an old friend and stay at their house.  Dolores is married very happily and Jessica knows they get along well but thinks he's a little blunt and a bit rude.  He can be very charming and then turn into an angry man.  As long as Dolores is happy, Jessica lets it go.  When she decides to go for a morning run, she sees something funny by the koi pond.  Unfortunately it was the husband and he's dead.

Berkley and Net Galley let me read this book for review (thank you).  It will be published the 8th of June.

When she sees a stone near his head, she knows it's murder.  There are no stones of that type in the koi pond.  When she tells the Sheriff  that, he blows her off.  He'll do his own investigation.

Jessica tries to make some sense out of his financial records.  She also asks her friend who is a PI to run a check on the people involved.  The Sheriff takes her friend in to ask questions.  He thinks Dolores killed him.  Jessica knows that's not true so she continues on with her own investigation.

Everyone has secrets.  The more she learns, the less she knows.  Will she find the killer before her girlfriend gets thrown in jail?