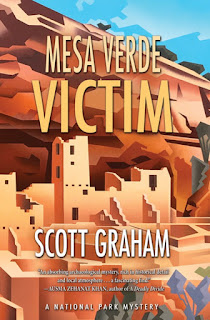 Chuck is headed for home when he sees emergency vehicles all around his house.   He's concerned about his wife but the body is bigger than that.  He's totally shocked to find it's Barney, a friend of his.  Who would have killed him in his backyard?

Torrey House Press and Edelweiss let me read this book for review (thank you).  It will be published June 16th.

There are very old Indian artifacts hidden on the mesa.  Barny was part of the crew working on finding them.  You meet greedy people who want to sell the artifacts, those who are trying to protect them, and those who would like to see them left alone.

There is another murder.  They warn Chuck to stop snooping around but he doesn't like being a murder suspect.  He almost turns into the next victim..

I had no idea who the murderer was and was very surprised to find out who it was...