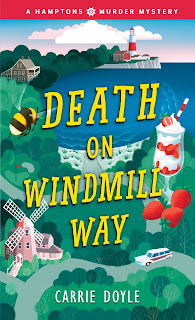 Antonia has purchased an old inn, remodeled it, fixed up the kitchen, and now has the restaurant as well as the inn.  She enjoys cooking and would like to spend more time in the kitchen.  She has bills to pay and guests to greet.  Then she hears a nasty rumor.  All the owners of the inn are murdered.  She decides to investigate.

Poison Pen Press and Edelweiss let me read this book (thank you).  It will be published June 30th.

She finds that the last owner died of a bee sting.  Everyone thought it was a heart attack, but one of the paramedics thinks other wise.  She starts looking for where  you could acquire a bee.  They aren't usually  out in December.

She has a number of suspects.  Two fighting females, several beekeepers, and folks who held a grudge.  As she weeds thriugh that, another inn owner was murdered.  She was an old lady who keot to herself.  Why would someone murder her?

Now she has two murder cases to solve.  She asks more questions and then she invites everyone to dinner.  They all come, some grumble about it.  Then she talks about the case,  The murderer was a complete surprise to me.

This is a good mystery with plenty of action and problems to overcome.