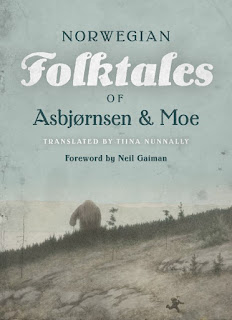 I've read many fairytales since I've been collecting and selling books.  These tales sometimes sound familiar but many are new tales to me.  None are very long.  They would be good stories to read aloud but some are a bit scary so don't make them bedtime stories.

University of Minnesota Press and Edelweiss allowed me to read this story for review (thank you).  It will be published September 17th.

My favorite character was Ash Lad.  His two older brothers tell the King he's said outrageous statement.  So the King tells Ash to do it.  If he succeeds, he'll get the princess and half the kingdom.  He does it but his brothers have come up with another impossible chore for him.  After many trials and tribulations, he finishes the tasks and gets the princess and half the kingdom.  Then he gets even with his brothers... He wins so many kingdoms and princesses that he must be exhausted keeping up with them!

They are all good stories.  The kings all think they are sly, but they are not.  Some of the characters fool trolls.  Some of the trolls have more than one head.  There are a lot heads lopped off in these stories.

I found the stories entertaining even if a bit bloody in spots.  And Nunnally’s informative Translator’s Note places the tales in a biographical, historical, and literary context for the twenty-first century.

This is not just folktales; it's history.