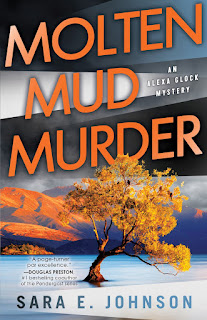 Alexa is in New Zealand and when they find a man stuck in a molten mud hole, she volunteers to help them solve the crime.  She's a Forensics expert, with a specialty in teeth identification.  Since the face has been eaten away, the teeth may be the only way to identify him.  They don't want her help but when the man they usually use is called home for a baby's birth, they give her a temporary contract.

Poisoned Pen Press and Edelweiss gave me the opportunity to read this book for review (thank you).  It has been published and you can get a copy now.

They move into investigative mode.  They search his car and find condoms.  They talk to his wife when she and the children return from a trip.  She's on birth control pills so he may have been having an affair.  They are trying to determine why he was at that site.  He evidently went there to meet someone, who hit him in the head with a rock and then stuffed him in the molten mud.  It looks like a Maori revenge but it doesn't mean a Maori did it.

Alexa finds herself getting involved in the investigation.  She's reminded that's not part of her job, but she's enjoying being involved in it.  At least she is until she almost gets killed for her questioning...