The Retribution by Val McDermid 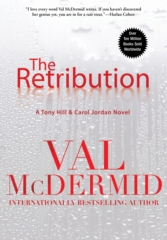 Jacko Vance is a very bad man.  He killed indiscriminately for the joy of it.  And now he's escaped jail and coming back to get even with those who incarcerated him...

Atlantic Monthly Press allowed me read an ebook of this story for review (thank you).  The book was published in January and you can get a copy at your local bookstore now.

I have never read anything by this author before but I love police procedurals, especially those set in other countries.  It's a way to learn more about places I will never see in person and it's fun to read about different police techniques.

This author has a devious mind.  She has researched all the ways to function illegally intelligently.  She's also very good at psychological profiling on his own characters.

Jocko is not stupid.  He's had his life taken away from him, so he wants to take their reasons for living away to get even.  He doesn't want to kill them; he wants them to suffer.

The two main characters are Dr. Tony Hill and his friend Detective Carol Jordan.  Ten years ago, the two of them put Jacko in jail.  Jacko's first victims are Carol's brother and his significant other.  It's an ugly death.  It also drives a wedge between Carol and Tony.  Carol thinks Tony should have been able to predict Jacko's actions and it's his fault her brother died.

This an intense, heavy read.  You learn about the baggage the two main characters have and you watch Tony trying to get Carol to at least remain friends.  How the killer dies is a shock.  How the book ends will make you want to read the next in the series to see if the relationship can be resurrected.  But you won't want to put the book down while Jocko walks the streets.  There's also another serial killer about, so you have more than one mystery to follow.

This reads fast and holds your attention from beginning to end.  This is not a cozy mystery; this is a rock you in your boots read.  I enjoyed it, why don't you try it?

Posted by Journey of a Bookseller at 1:36 PM

Val McDermid is a "she"! Thanks for the review.

Journey of a Bookseller said...

Thanks for the correction. I automatically use "he" in my writing. I'll have to be more careful. I've fixed it!