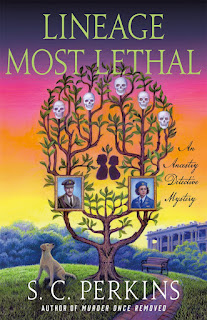 Lucy works with genealogy and she's creating a list of Pippa's relatives and videotaping the living ones.  It's going well.  When she's standing outside the hotel, a man approaches.  He falls and she goes to help him.  He hands her a pen and says keep them safe and dies.

Minotaur Books and Edelweiss allowed me to read this book for review (thank you).  It will be published July 21st.

Lucy knows the pen is a Montblanc and her Grandfather collects them, so she asks him to come look at it.  She has no idea it will lead to him telling her about his days during the war.  He was a spy and so was the dead man.

Then a woman dies on her walk and she was a spy, too.  They need to figure the killer out before they are all killed.

The killer was someone I didn't suspect.  The reason was because they killed her Grandfather for being a traitor.  But Lucy found out he was no traitor, he was a undercover agent and was killed by the enemy.  The killer is sure she's lying.  The killer has a gun and intends to kill Lucy and Pippa.  Can they stop the killer?