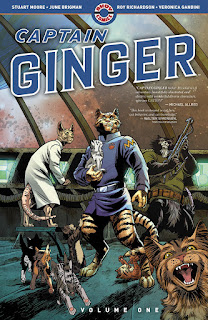 This is Volume One of Captain Ginger.  Ge's piloting a starship full of cats.  Their world has been destroyed along with their previous leaders.  Noe they are traveling space looking for another place to settle.  It's becoming necessary because they are still breeding and their population is soaring.

Ahoy Comics and Edelweiss gave me the opportunity to read this book for review (thank you).  It is being published today.

This is a graphic novel and it's well illustrated.  It adds to the story line.

The starship isn't in the best shape and a fight with the aliens makes it worse.  He threatens the aliens and they believe him.  Then he hits them in their most vulnerable place and escapes.  They find an old space station and take refuge on that.  After all there are rats there and it's been a long time since they had fresh food.  The Captain says they can't stay there but the whole crew wants to, so he lets it go for a while.

My favorite parts were the fights between him and his second in command Sergeant Mittens.  They've been frenemies for a long time.  The other oddity was that they had feral cats on the ship.  How can cats have feral cats?

This was a fun adventure with more to come.  Watch out for those aliens!