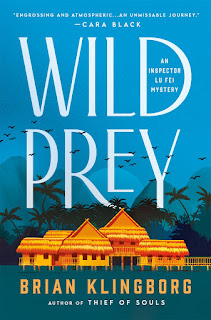 This story is set in China. They believe that certain parts of animals can heal them or make them more powerful.

Minotaur Books and Edelweiss let me read this book for review (thank you).  It has been published and you can get a copy now.

Inspector Lu is approached by a small girl who hasn't had contact with her sister like she used to.  She thinks she may be dead.  As he checks into the case, he finds that there is no sign of her.  His boss tells him to forget her but he can't do that, so he gets suspended.

As he tries to find her, he runs across wild game trafficking, which is also illegal.  To keep himself safe, he goes undercover.  Changes his hair color and style and adds an earring.  Spruces up his clothes.

The problem is that no one is really telling the truth.  As he hunts for clues, he finds himself in bad situations.  The people he thought he could trust betray him.

There are several deaths and you wonder if he will get out alive...

Will he find his answers?