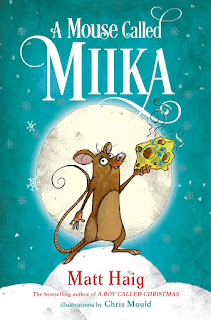 Miika has been alone almost since his birth.  His mother had several babies at once and she fell asleep before naming him.  He ate the mushroom she was holding, so he left home to live on his own.

Knopf Books for Young Readers and Edelweiss let me read this book for review (thank you).  It will be published on November 2nd.

He makes friends with pixies and elves and even one human boy.  Then he finds a lady mouse and wants to be friends with her.  She talks him into an adventure he shouldn't do.  As time goes on, he returns the cheese he stole and ends his friendship with her.

He lives with the truth pixie and he tells her about it.  She says he has to be true to himself and not do what others want.  He agrees.  Now he's going to improve and he's even going to leave a piece of the cheese given to him on the lady mouse's doorstep.

This was an interesting story.  Miika has some magic powers that make it even more special.