The Creak on the Stairs by Eva Bjorg AEgisdóttir 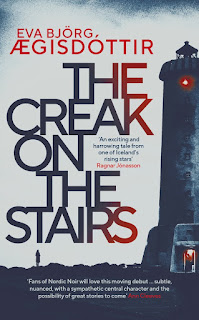 A body was found in the water by the lighthouse.   They knew who she was but they had no idea why she was killed.  It wasn't suicide.

Orenda Books and Edelweiss allowed me to read this book for review (thank you).  It will be published on March 1st.

This is the story of a few families in a small town.  The woman killed was a quiet youngster who had a limited number of friends.  She also had an evil side.

As they try to dig up what happened, they know some are not telling all they know.  This is set in Iceland and it's not a big town.  Everybody knows everybody else but secrets can be hard to keep.

One girl goes missing early in the story.  Eventually they found out what happened.  The victim by the lighthouse had a drunk mother who traded her favors for rent.  Then the man's interest turns to the daughter.  The reason they knew what happened was because the person molesting them took pictures.

The families all had their secrets and justice is only partially served but the police finally figure it out.  It doesn't seem like Iceland would have problems like that but there are crimes everywhere...