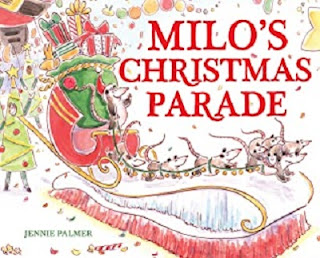 Milo loves the Christmas parade.  He attends every year so he can see all the new wonders.  His family comes too, but all they are interested in is the food people have dropped.

Abrams Young Readers sent me a copy of this book to read for review (thank you).  It has been published so you can get a copy now.

Milo decides to create his own float so he can join the parade.  It's not going as smoothly as he would like, so his family joins in.  They might not be impressed by the parade, but they love Milo and help him achieve his dream.

He gets in the parade at the very back but a big balloon knocks him out of place.  They all band together and rush to catch up.  Miles is asked if he will take a passenger.  He says yes.   This passenger makes his float even more important.  Miles has lived his dream.