The Finders by Jeffrey B. Burton 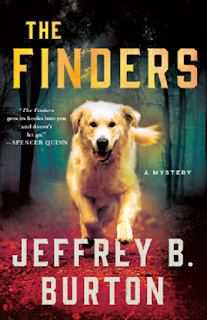 Mace lives on the outskirts of Chicago and is a dog man.  He teaches his dogs to find cadavers (dead people).  He adopts a golden retriever who has more intuition than his other dogs.

Minotaur Books and Net Galley, let me read this book for review (thank you).  It will be published the 30th of June.

The new dog is very good at finding bodies.  She also has a talent for picking out killers but it takes a bit before Mace realizes it.

They're after a man who is a serial killer, always looking for a certain type.  After a while they run him down and find he's looking for a woman like his sister, who died.  He slept with her and they had a child.  That child died because he tried to kill Mace.  The cop with him took him down.  Then Mace learns there was another man involved.  He liked his son.  Can he find him?

He knows he's around because he sees him in the trees, but his dog protects him.  Even when he meets him, he doesn't recognize him.  He wears a mask when on a killing spree.

The ending is full of action and weapons and you have no idea who is going to win.

This not a cheery book but it makes you feel good to see the criminals put behind bars...