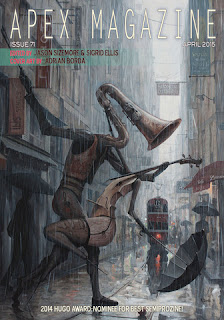 Twenty-one stories of the future and all of them pure fantasy.  Short stories are my favorite reads, how could I pass this one up?

Library Thing and Apex Publications gave me the opportunity to read this collection for review (thank you).  It has been published, so you can grab a copy now.

This collection has a wide variety of stories.  Some focus on myths, some on sex, some on strange things the future may hold and some really got my attention.

If You Were a Dinosaur, My Love by Rachel Swirsky (Issue 46)

A Matter of Shapespace by Brian Trent (Issue 51)

She Gave Her Heart, He Took Her Marrow by Sam Fleming (Issue 79)

Advertising at the End of the World by Keffy R.M. Kehrli (Issue 3)

Armless Maidens of the American West by Genevieve Valentine (Issue 39)

The last story in the book was chosen by the readers of the magazine.  What I found most interesting was the fact that my favorite stories were the first and last in the book.

Jackalope Wives is haunting and sounds like the old tales storytellers in Indian Tribes tell.  It sticks with you.

The last story is "She Gave Her Heart, He Took Her Marrow" by Sam Fleming.  I was amazed that I picked the same story other readers did.  I'm usually out in left field and not in the pack but this time our tastes were the same.  This is another haunting story that sticks with you.

None of the stories are boring.  All them had their own flavor and each of the authors engaged your brain.  I like reads like that.  Give it a try and pick your own favorite stories.  Feel free to tell me what you liked best since I told you which ones I did.

Posted by Journey of a Bookseller at 7:30 AM