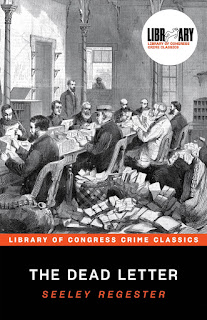 Eleanor is in love and will soon be married.  Richard loves her, too, but she loves Henry.  Then they find that Henry has been murdered!

Poisoned Pen Press and Edelweiss let me read this book for review (thank you).  It will be published in June 15th.

Someone stabbed him in the back.  Eleanor withdraws into herself and mourns.

Richard is not part of the family but he works in the firm and appears to be a successor for Eleanor's father.  After this murder, he gets a cold reception from the old man.  Someone is spreading rumors about him.

There's turmoil in the family, no real evidence on who the killer could be and it turns into a real mess.  Luckily Richard meets a man who is willing to look into it.

It takes a long time, several trips, and the perseverance of the man helping to get to the truth of what happened.

This is a classic written several years ago and the writing style is slow and filled with details.  It took a bit to read but it was a good mystery.