The Mysterious Disappearance of Aidan S. (as told to his brother) by David Levithan 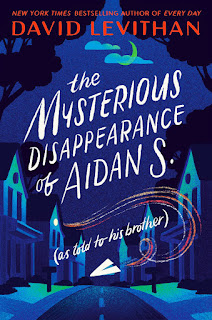 All of a sudden, his older brother wasn't there.  They searched all of the house, the woods, and got the police and their neighbors and friends all looking for him.  He was gone several days and then suddenly he was home again, in the attic.

Knopf Books for Young Readers and Edelweiss allowed me to read this book for review (thank you).  The book will be published on February 2nd.

When he's asked where he went, he tells them he has visited another world.  The only reason he came back was because he was banished.  They were afraid he might be carrying a disease.  As he tells his story he can tell they don't believes him.  His brother does even if the tale is out of this world.

The newspapers get hold of the story and it creates all kinds of backlash.  The folks looking for him think he's lying.  Nobody has heard of the world he's talking about and they think he's making it up.  School was hard because everyone had some opinion of him.

Finally things begin to settle down.  That's when his brother discovers something that proves it was not a lie...

Email ThisBlogThis!Share to TwitterShare to FacebookShare to Pinterest
Labels: Book Faerie, book review, David Levithan, The Mysterious Disappearance of Aidan S. (as told to his brother)