Two Degrees From Zero: A Snowboarding Adventure by M.J. Stewart 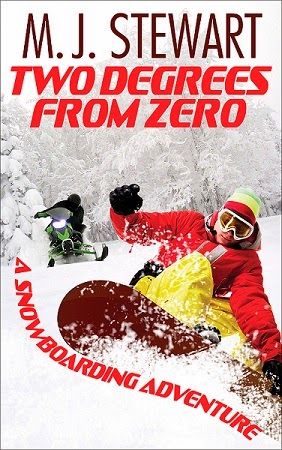 Snowboarding itself can be dangerous, but when you rent a snowboard it shouldn't put you in danger.  Should it?  I thought not.  In this case, though, it's the snowboard that's the danger...

Goddess Fish Blog Tours and the author allowed me to read an ebook of this story.  The ebook is available now; this is written for middle grade readers.

Derek has been feeling out of sorts since his father died in a car accident.  He was there and feels it was his attitude and actions that caused the car to go out of control.  Telling him that's not true doesn't make it better.  Now his mother has found a new boyfriend and they're going to go on a snowboarding vacation.  At least he gets to bring one of his best friends, a girl named Janae.  The "Clan" is going to play in the snow and try to forget the sorrow of the past.

Derek might not forget it, but he doesn't have a lot of time to think about it.  They go by sleigh to a yurt where a dinner is being held for guests.  It's not bad but it's not exciting either.  Sleighing isn't snowboarding.  Some guys on Arctic Cats scare the horse and slow the sleigh ride down.  And then it starts to snow, really snow.  When they get stuck in the yurt, the men with the Arctic Cats offer to take them back to the condo they've rented.  Derek finally talks his mom into it.  But that's not where they end up...

They are snowbound, have limited food, have to use an outhouse, and there's no communication.  Derek and Janae sneak out to go for help but they get lost in the white of the snow.  Derek has to face some ghosts from his past before the night is over.  Will they ever get out?

The author will be awarding a $25 Amazon Gift Card to a randomly drawn commenter during the tour.

Thanks for hosting today. - M.J. Stewart

Love the sound of the book.

Thanks for the comments and I hope you get a chance to read the book.

I've never tried snowboarding. For me it would be very dangerous.